This delicious, no-bake Keto Cheesecake is a snap to make and such a satisfying dessert! We love ours topped with fresh berries. Make this quick keto cheesecake for afternoon snacks or a light dessert.

This post is sponsored by ZenSweet, a company that makes clean, keto sweeteners and baking products. I use this monk fruit sweetener almost exclusively in my low carb baking because it tastes just like sugar and is from a source I can trust!

**GIVEAWAY** LOOK BELOW FOR A CHANCE TO WIN ZENSWEET PRODUCTS AND TRY THEM OUT YOURSELF!

If you’ve never made a no-bake cheesecake before, you’re in for a treat!

The almond flour crust is made with toasted coconut to give it the same satisfying crunchy texture of a graham cracker crust, with the added benefit of extra fiber and healthy fats!

I have made lots of cheesecakes this year, and this one takes the cake (pun intended!). It’s super simple, so creamy and rich, and is virtually fail-proof. Once you’ve mixed up the ingredients and poured them onto the crust, all you have to do is pop it in the refrigerator to chill, and it comes out the perfect consistency every time.

My trick to amazing keto desserts that taste like the real deal? I use ZenSweet Monk Fruit Sweetener, which is a blend of erythritol and monk fruit. The combination is low carb perfection. It’s sweeter than straight erythritol, with a much better taste than straight monk fruit.

I’ve been using this sweetener exclusively to prepare desserts for family gatherings this year, and now my whole family is buying it also. Honestly — you can’t tell the desserts aren’t real sugar! In my opinion, they actually taste better.

Hop on over to ZenSweet’s Website to learn more about their natural low GI sweeteners and baking mixes!

Enter to win 2 bags of ZenSweet Monk Fruit Sweetener and 2 Baking Mixes of your choice!


How to Make a Keto Cheesecake Crust

Instead of making a plain almond flour crust, this delicious option has some toasted coconut in it. The addition gives it a slightly crunchy and chewy texture, similar to what you’re used to with a classic graham cracker crust!

Step 1: In a medium sized mixing bowl, add the almond flour, toasted coconut, ZenSweet, and a pinch of salt. Give those ingredients a good stir, and then drizzle in some nut butter (I love almond and tahini in this recipe) and melted cocoa butter. You can also use coconut oil. I tested coconut oil and it works, but the crust is a bit more fragile. Cocoa butter stays solid at room temperature making it ideal for a no-bake crust.

Step 2: Press the crust mixture into the bottom of a springform pan. The springform pan is the best way to ensure your cheesecake comes out easily.

A Dreamy No Bake Cheesecake Filling

No bake cheesecakes are amazing. They use the same ingredients a regular cheesecake does, except instead of eggs, you use gelatin. Gelatin is a healthy way to help your desserts take on the chewy and more solid texture of sugar filled options.

I love adding Greek yogurt to my cheesecake fillings. It gives them a healthy tang and makes the cream cheese easier to digest.

Step 3: Bloom the gelatin in a little bit of water.

Step 4: Melt the gelatin in the water for about 20 seconds on the stove.

Step 5: Add the cream cheese to a food processor or a mixer bowl, and mix until the cream cheese has softened. I stop a few times and scrape down the sides and make sure I am really breaking it up well.

Step 6: Then, add the Greek yogurt, ZenSweet, and vanilla. Once those are fully incorporated into a smooth mixture, slowly drizzle the gelatin in while the processor is still running.

Step 7: Pour the cream cheese filling into the pan on top of the prepared crust. Smooth it out across the top, and then refrigerate it for at least 2 hours, or overnight.

Step 8: Slice the cheesecake, and then top it with fresh berries, keto lemon curd, or melted keto chocolate. I supposed you can leave it plain, but why?!

Cheesecake is an ideal keto dessert. The only swap that needs to be made is to use a non-nutritive sweetener. My favorite is ZenSweet Monk Fruit Sweetener.

Since this is no-bake recipe, the crust was a little trickier to make keto. I decided to hold it together with cocoa butter, an excellent source of healthy fats. It’s solid at room temperature, so the crust stays together better than if using just coconut oil.

Can I freeze a No Bake Cheesecake?

Absolutely! This recipe is a perfect make-ahead dessert. Wrap it tightly, and freeze it for up to 2 months. Allow it to thaw slowly in the refrigerator, and the top it as desired when ready to serve.

How do I store this Cheesecake?

How can I top this Keto Cheesecake recipe?

Ideal toppings for Keto Cheesecake are:

*To toast coconut, add coconut to a frying pan, and stir fry over medium heat until the coconut is light brown in color, which takes about 5 minutes. Watch it closely to prevent it from burning. **Cocoa butter is best for this recipe, but coconut oil works. The crust will be slightly more crumbly if made with coconut oil, because the cocoa butter solidifies at room temperature. ***To make powdered ZenSweet, just add the granulated sweetener to a blender, and process until it’s a fine powder. 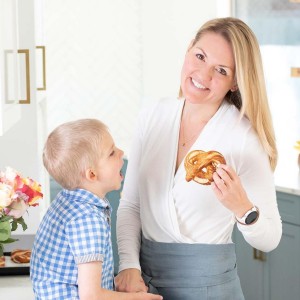 Welcome to Blissfully Low Carb, where I share mostly squeaky-clean (but also fun!) LOW CARB and KETO recipes! Stick around and explore, read more about Michelle, and be sure to say hi. Read More…

Keto Yogurt – How to Enjoy on a Low Carb Diet

More Posts from this Category

More Posts from this Category